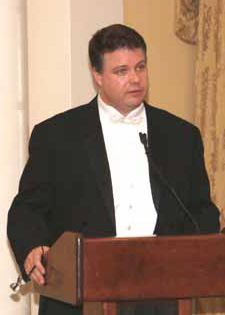 Barry Christopher Howard was born at Baltimore, Maryland, the son of Dale Harley and Margaret Catherine Howard.  He was married on September 7, 1991 to the former Amie Joan Palumbo, a native of Illinois, and the daughter of the late Anthony Joseph Palumbo and Joanne Kaye Sibigtroth MacDonald.  Barry and Amie reside in northern Maryland, and have four children.

Since 2017, Barry has been the chief financial and administrative officer (CFAO) at New America, a non-partisan think tank in Washington, D.C. focused on the future of war; artificial intelligence; online privacy; higher education; the future of automation and work; and several other strategic initiatives.  Previously, Barry was the chief financial officer (CFO), and a senior vice president, at World Relief, an international relief and development agency founded in 1944, working directly in over 25 countries, and headquartered in Baltimore, Maryland.  Prior to his time at World Relief, Barry was the chief financial officer (CFO) and vice president at YWAM, a relief and development agency working in some of the world’s most remote regions.

With over 25 years of experience in the non-profit operational and financial sectors, Barry has extensive experience in international operations, and has traveled to over sixty countries. He has held numerous board roles on international microfinance institutions, including Beselidhja Zavet Microfinance (Kosovo); KREDIT Microfinance Institution (Cambodia); URWEGO National Bank (Rwanda), and others. He has successfully monetized several at capital inflection points, reinvesting equity back into local communities in developing countries. In 2020, he was recognized by DCA Live as one of Washington, D.C. 's top non-profit CFO’s.

Most Venerable Order of the Hospital of Saint John of Jerusalem (bestowed by Elizabeth II, Queen of England)

Barry is a member of the Cosmos Club in Washington, D.C. He continues to actively serve on the boards of a number of relief and development agencies, as well as several historical and non-political civic organizations, including the board of the Blue Haven Children’s Home in Uttar Pradesh India; the North India Fund in Varanasi, India; and is a founding board member of the Justice Conference.  He is an active Trustee of the Dwight D. Eisenhower Society, which stewards the Eisenhower Farm and legacy in Gettysburg, PA.  Barry is an Eagle Scout, classical guitarist, competitive chess player, and his interests include philosophy, theology, psychometrics, and astronomy.